Heidi Erickson was a very important member of Team Phase II during “The First Forty Years” and remains one of my dearest friends and clients owning several REMINGTON STEELE*++ offspring and a phenomenal young II DAMB MUCH gelding (view her horses on her client page). 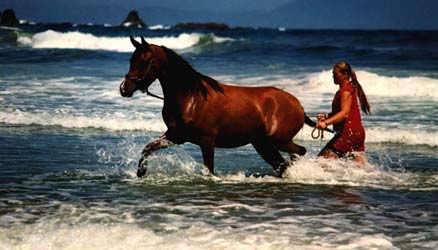 (left) Heidi Erickson riding CBT Steelen Trouble in a parade; (right) Heidi and Remington Steele*++ enjoying a relaxing bare-back ride in the evening at Scottsdale after Rem went Scottsdale Top Ten Stallion Halter for the 2nd time at age 17 after a full performance and endurance career (against younger horses going to Nationals)

I first met Heidi as a teenager at Cow Palace Grand National Show & Rodeo where she fell in love with “REM”. Subsequently she lived and apprenticed at the farm in Cool, Ca. for many years. Heidi was riding with me late one evening when I fell on “Little Cougar Rock”, after crossing the American River at Poverty Bar on the Tevis trail, badly crushing my knee.

Heidi administered first aid for shock as the sun set and rode off in the dark, ponying my horse, for a two hour ride up rugged terrain mountain to the nearest house to phone for help.She took care of me in the wheelchair (not an easy task) and the 25 horses and my two children and 7 Bernese Mountain dogs for a year while I recovered and learned to walk again. There is no way I can ever repay friendship like this. I love Heidi like a daughter. She would be with us still if I could convince her to put up with our New England winters! 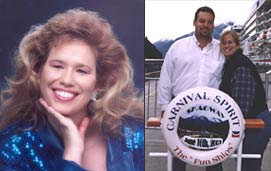 Kris MacKenzie Harper has been a dear friend since Patti helped her buy her first horse at the Lacey 4–H / Future Farmers Auction when Kris was 11 years old. Later, when Kris had become a successful business woman, she joined Patti at Phase II – Cool, Ca. and was a partner in JUST II COOL as well as campaigned the wonderful REMINGTON STEELE*++ son RIBBONS OF STEELE and daughter STEELE YOUR HEART. We will for ever be indebted to Kris for all she has done for the horses and the farm. Patti considers Kris, who lost her own wonderful mother Janet at a young age, as an adopted daughter and hopes she will re-join the Team when she retires.

My beloved husband of "the first 40 years” C. E. Andy Bailey without whom I would never have been able to achieve much in life. I was extremely, debilitatingly shy when I married him at 20 and Andy pushed me to break out of my shell and pursue my dreams. He really didn’t have an interest in horses yet supported me in every way... when retirement age approached we decided to go our separate ways so he could have some time to do the things he has always wanted to do in life. We all remain the best of friends, he visits the farm once a year and has helped to support the farm during Jerel’s and my big move from California back home to NEW HAMPSHIRE, USA. Andy really didn’t ride much and had only done one 50 mile ride when he entered the Tevis-100-miles-in one-day ride, accompanying me to bolster my courage. Here he is on RIBBONS OF STEELE doing Cougar Rock ....and he finished Tevis that day even though he never wanted or intended to and proudly wears his buckle ! We wish Andy all the best...