Our Straight Russian and Polish/Russian Programs...

The Next Forty Years… the Russian mares story… 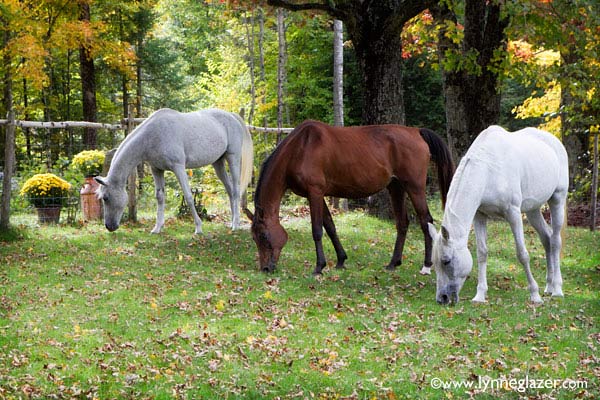 Russian Treasures (left to right) by Moment, Novator and Fast Ptrack, three months after their rescue

As many of you know, I advertised on my former web page that I was in the process of retiring….after losing REMINGTON STEELE*++, I subsequently broke my back and re-injured both my knees in a car accident…I felt like there was no other choice. I had been blessed with a wonderful forty years in the horse world and gratefully figured that was enough for one life time.

I reduced my herd down to my two accomplished stallions …JUST II COOL our Monogramm son, and II DAMB MUCH our Sambist son out of a Monogramm daughter, a “REM” daughter and two “REM” bred fantastic geldings for “my old age.”

First, my heartfelt thanks to all of you who asked me to keep our breeding program going, as there are few farms left in the USA breeding big, powerful, sound, strong boned, pasture raised tough, intelligent yet “pretty enough” using Arabians. 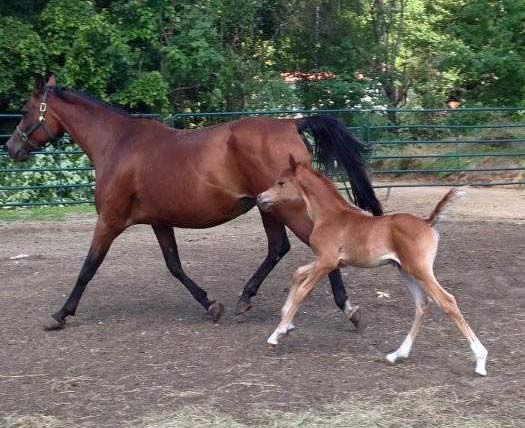 Secondly, a breeder of Russian Arabians, whom we met while he was in the process of purchasing all our remaining frozen SAMBIST semen, talked us into looking at his herd of Straight Russian and Russian cross mares in 2013. Due to his work, he was an absentee owner, living far from his horses, so he had to have them boarded. As the current manager had been unable to get some of the older mares with precious heritage bloodlines in foal, our original plan (as we are well known for being able to get hard-to-settle mares in foal), was to get these treasures bred and return them in foal to the farm.

Unfortunately, the facility where the mares and stallion were living fell on hard times due to the economic downturn and from taking in too many rescues. Upon our and our new client's arrival at the farm it became apparent that the whole of his herd needed to be rehomed including the stallion, Mykol. We ended up taking the mares and the stallion, but sadly Mykol passed away during 2015. You can view Mykol's Memory page HERE 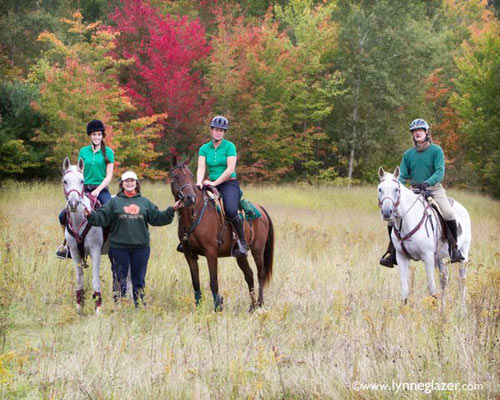 Our straight Russian treasures, the old brood mares: MOMENTS JENNIFER by Moment (with Katelyn Heath up), Patti Demers Bailey coaching, TARATANTARA (who sadly passed in 2015) by Novator (Sarah Hare up), PENAMORE by Fast Ptrack (Jerel Harris up), on our farm, New Hampshire, USA

Eight horses were moved immediately to a local veterinary facility. The horses all had health exams, worming, vaccinations, individual veterinary and farrier work. We were over a thousand miles from our farm so we postponed our return until the veterinarian advised us that it was safe to travel with the three oldest mares and the stallion. The younger mares would be boarded at a farm recommended by the veterinarian in a large pasture and well cared for until the next spring. 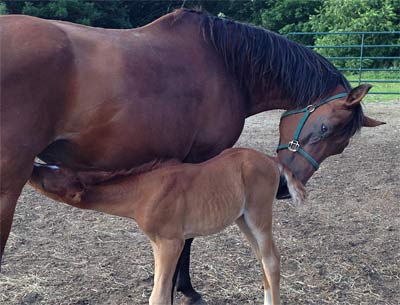 I obtained a letter from a veterinarian confirming the emaciated condition of the horses, which helped me explain the situation when I stopped to rest them at Artillery Ridge Camp Ground in Gettysburg Pa. They were very understanding and I am so grateful for their kindness. I also called my home town animal control officer to inform him too as our community is very senstive to horses that are not being properly cared for, or that are too thin. 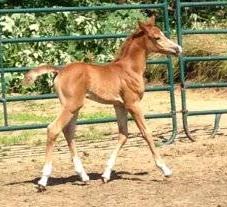 The mares are really Russian Treasures… MOMENTS JENNIFER “Endy” a *MOMENT daughter; three FAST PTRACK daughters… PENAMORE “Pena”, FAST TRISHIA “Trisha” and FAH STOIKA "Fahs"; STOIKHA II “Stoi” a DRUG granddaughter; and MEDSNAIA “Meds” a *MOMENT and *TAMERLAN granddaughter. There was also TARATANTARA “Tara” a *NOVATOR daughter, but "Tara" sadly passed away in 2015 - view here 'memory' page HERE; All are “black type" bred, that is all are by stakes winners and/or stakes producing athletes. A stakes race is basically a race between winners, so that a stakes winner is a winner among winners! Their pedigree analyses and, for the most part photos, are available under the Mares/Geldings and Pedigrees drop down.
All of the horses are now in good flesh, very well fed, and happy living as endurance prospects should, outside in large pastures with rocks, woods and hills. Our client has now become our partner and had run-in shelters built for all so they can choose to be sheltered in inclement weather. 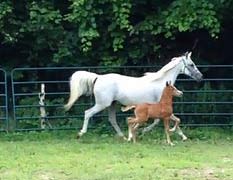 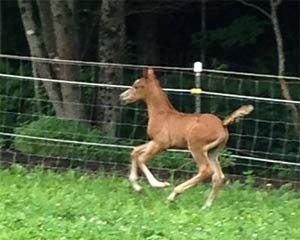 The challenge is to keep the blood line going but not produce so many foals that they risk getting into the same plight. Therefore, we only bred the two oldest …the NOVATOR daughter to our SAMBIST/MONOGRAMM stallion II DAMB MUCH and the MOMENT daughter to our MONOGRAMM son JUST II COOL using the MONOGRAMM blood to add additional pretty to their heads!

I can honestly say the resulting foals (a liver chestnut filly and a copper chestnut colt with a flaxen mane and tail) are spectacular…the best we have ever produced…whenever God closes a door, somewhere He opens a window!

The moral of this story is that NOW, instead of retiring…I am looking forward to another 40 years…which means I will live to be 105 years old!!!