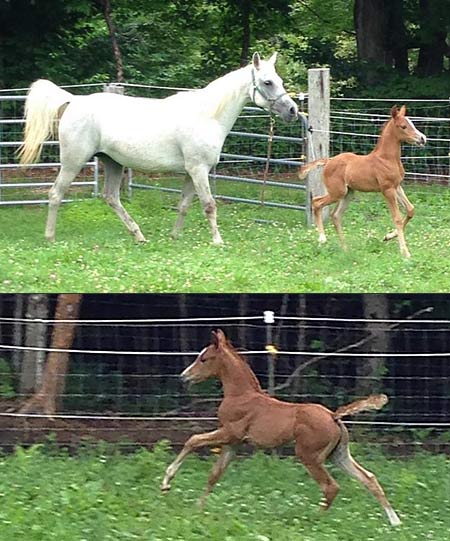 A very exciting young colt by Just II Cool and out of the straight Russian *Moment daughter Moments Jennifer. “JUSTY” (or M&M) has the classic head of his paternal grandsire *Monogramm and the neck from his paternal grandsire, *Moment! He is very correct, well balanced and athletic with big expressive eyes. He should make a very classy all around Arabian athlete and endurance horse, has the type and neck to be be used as a breeding horse and would probably hold his own in halter classes across the board like his sire did!

While trying to fit him with a barn name we tried “M&M” paying tribute to his direct grandsires Moment and Monogramm....but he has so much attitude the younger crew spell it “Eminem” after the rapper....Patti prefers “Justy”!

We would like to sell JUST A MOMENT II (View Sales List) to a show and performance owner or an extreme endurance home...he is one of the very best colts we have ever bred....we would like to retain breedings so are willing to work out a good deal to any one looking for the colt of a lifetime!!!! Call Patti ++ 603-786-9771