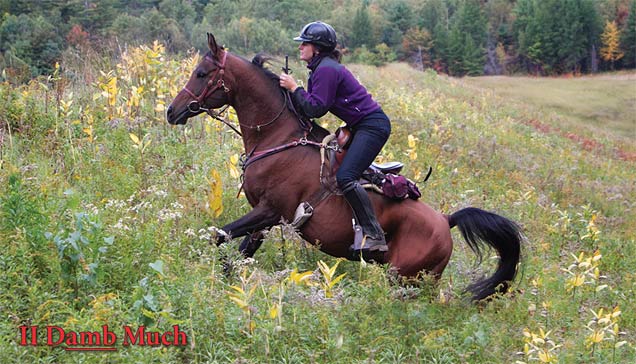 ENLARGE II DAMB MUCH and Sarah Hare, from the UK
Video of II Damb Much standing in stud at Phase II - Fast Track

II DAMB MUCH, foaled in 1999, is a 15.3hh, extreme athlete sired by Europe’s great distance race horse Sambist, out of a beautiful endurance-bred Monogramm daughter. “Dambit” (affectionately called “Buddy” by Becky Hart) produces a powerful stride, speed, size, agility and good bone. In 2013 Sarah Hare came to Phase II-Fast Track to begin her training for the Tevis Cup on II Damb Much. The Crabbet Journal asked her to write an article on her training, that they then published. Afterwards the Endurance GB Magazine (Great Britian) re-published Sarah's article and included a photo on their March/April 2014 cover. Click HERE to view the magazine cover and read the article.

"Dambit"'s sire SAMBIST was aquired aged six through the famous Kossack sales by HH Sheikh Abdullah bin Khalifa Al-Thani of Qatar for his UMM Quarn stud, for a record $385,000. SAMBIST's blood is very valuable and rare globally with only a very limited number of frozen semen straws available.

I first saw SAMBIST when I went to Europe to visit the Sheikh's UMM Qarn Farm in the UK. I was looking for a cross for my REMINGTON STEELE*++ and my MONOGRAMM daughters. SAMBIST was the most correct stallion, leg and hoof wise I have ever seen. Later, I found out SAMBIST was famous all over Europe for being the most correct and most sound Arabian racing stallion. SAMBIST is a 15.3 hand Straight Russian stallion with a pedigree filled with champion race horses. Sambist subsequently belonged to my friend and partner, Anne Brown, in England at Gadebrook Stud until he passed away late 2014. 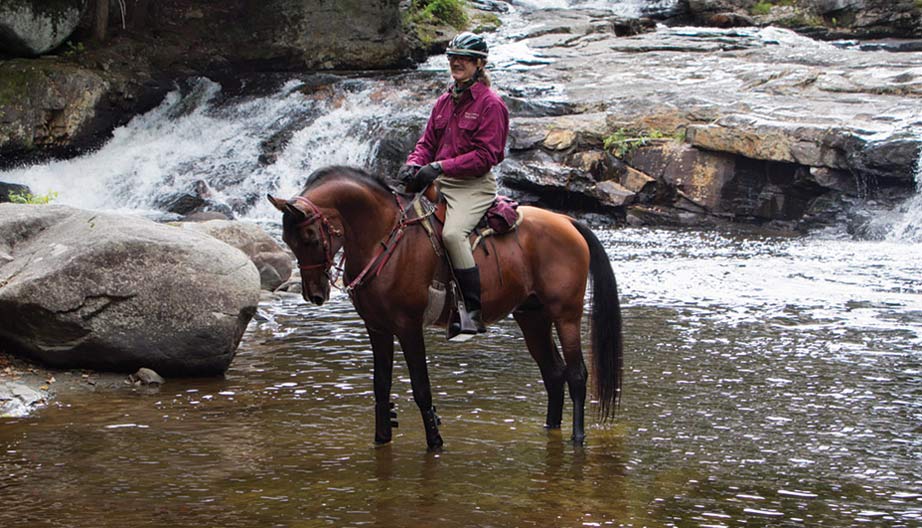 Jerel Harris, Breeding Manager and II DAMB MUCH, by Sambist
SAMBIST was one of the greatest racing Arabians in Europe, retiring 100% sound after five years of distance track racing all over Europe and was eight lengths ahead of the pack in his retirement race. He has been named Premium Race Horse Sire of the Year NINE times in the UK. Sambist was a multiple stakes winner and champion in Russia, the Middle East and the United Kingdom. He was the two time Long Distance Champion in the UK, is undefeated in all races over 1¾ miles and was European Champion Stayer 1994. The only time SAMBIST was ever shown, after he retired from racing, he won the Liberty Class at UK International Show 1996. 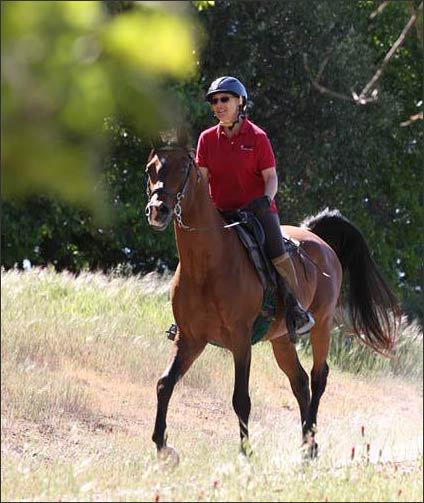 Three times World Champion Endurance rider Becky Hart campaigned this very valuable Sambist son, II DAMB MUCH. (I sold a half interest in II DAMB MUCH for $150,000 in 2002 when he was three). Becky completed three successful 50-mile endurance rides in 2008 and was thrilled with “Dambit/Buddy”. Becky’s aim was to use “Dambit/Buddy” in the World Games in Kentucky in 2010. In the process Becky Hart was made chef d’equipe of the 2010 World Games as a consequence was not permitted to ride. 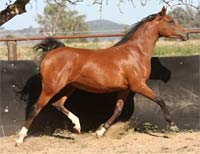 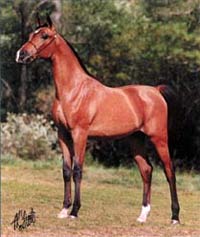 II DAMB MUCH as a yearling in halter

Tom Sayvetz, MD (of Asgard Farm, breeder of HERALDIC, THEATRIC, LOGISTIC etc), who spoke at the 2009 American Endurance Riding Conference (AERC) convention on pedigrees and performance, came up to Becky at convention and said, “I don’t know who bred that horse you’re riding but they sure knew what they were doing. He has the perfect pedigree for an endurance stallion.” I was very thrilled since II DAMB MUCH is the fifth generation of my breeding program which I have invested more than 40 years of hard effort into. "Dambit" is out of one of my most beautiful mares, II Much Money, a Monogramm daughter. MONOGRAMM is internationally aclaimed for producing international champion Halter horses, race horses and using horses in many different disciplines. MONOGRAMM was the second WAHO Trophy winner for the USA - our REMINGTON STEELE*++ being the first.

II DAMB MUCH is a big, powerful, solid, impressive bay that trots dead level barefoot. THIS IS A VERY SPECIAL HORSE.