Crabbet and Polish Programs... Past and Future

My name is Patti Demers Bailey and I have been developing an internationally recognized and respected Arabian show and sport horse breeding program since 1973. We have formed a partnership with Fast Track Farms to continue their straight Russian and Polish/Russian breeding programme and will integrate it into our Remington Steele*++ and *Sambist programme through stored frozen semen. 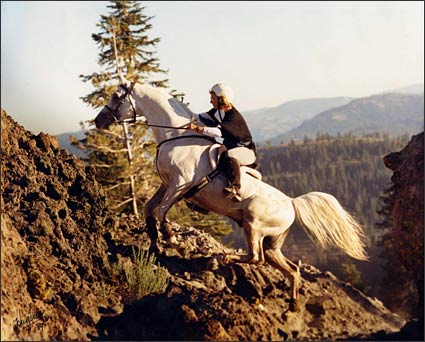 The main stallion in this program was the first WAHO Trophy winner for the USA and Living Legend, Remington Steele*++ who has at least 50 of his 200 plus progeny competing in endurance all over the world as well as countless show champions. 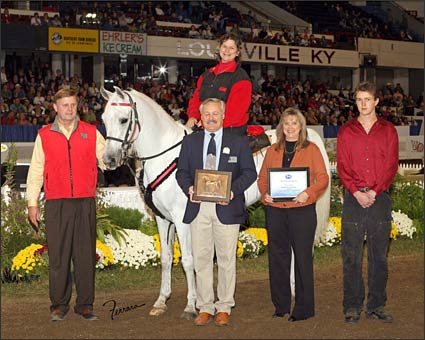 “Remington” was line bred Ferzon through his sire Gaffizon, and is 56.88% Crabbet. I credit his incredible mind and athleticism to John Rogers’ “golden cross” …*Serafix bred to *Karadjordje+++ which accounts for the many National Champions and Top Tens in his tail line. (*See “Rems’ ” dam –Jordjinas’ page and pedigree description)

I have a degree in Animal Husbandry from University of New Hampshire. I have put four decades of judicious planning into my breeding program. I began by balancing Remington’s intense Ferzon by line breeding back to *Karadjordje +++ / *Serafix daughters. After I developed a homogeneous herd I began to look for the perfect out-crosses. I acquired as many Monogramm daughters as I could find and bred them to Remington Steele*++ to produce more “pretty” without losing athleticism. I have always been impressed with what the Polish government has done with the Monogramm blood. (Please refer to my resume and career timeline.)

In 1998 I traveled to Europe looking for the perfect “new blood”. I wanted an out-cross stallion that was bay in color with no white legs. I wanted a long length of hip with extreme thrust and impulsion in the hock. My goal was to find the most correct legs possible accompanied by short canons and long forearms. I was looking for a tall horse, but tall in the correct proportions. In addition I wanted a pretty head, excellent disposition and the drive to be a top athlete. 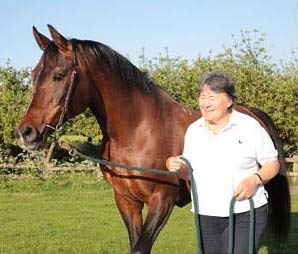 Through Val Bunting, as agent, I traded 15:3 Remington Steele*++ semen for 15:3 Sambist semen at Um Qarn, at the time located in the U.K. I subsequently produced two of the best athletes I ever bred both by Sambist out of Monogramm daughters. The stallion, II Damb Much, out of II Much Money by Monogramm out of a *Karadjordje +++ / *Serafix mare. The other is a mare named Epistode II who became an incredible open jumper. “Epi” won her class and went Champion in Sport Horse in Hand her first time shown. Now owned by Pat & Pam Livecchi of Desert Rose Farm in Jupiter, Fla. Epistode II made a name for herself in the open hunting field at Wellington hunting with warm bloods and Thoroughbreds. In her first hunt a wild boar ran out from the underbrush under her legs and “Epi” kicked the pig out of the way without breaking stride or upsetting the field!

Sambist was subsequently purchased by my partner in England, the internationally respected breeder of World Champion Eudruance & Premium Show Arabians, Anne Brown of Gadebrook Stud, shortly after I took her to see this exceptional stallion. In 2014 Sambist was named Racehorse Sire of the Year for the 9th time in the United Kingdom shortly before he passed away on Nov 17th, 2014. He was acclaimed by all who have seen him in person to be the most “utterly correct Arabian they have seen”, which accounts for the fact that he raced successfully for five years all over Europe and the Middle East retiring 100% sound and 8 lengths ahead ofthe pack in his retirement race. Shortly after Sambist retired he was named UK International Liberty Champion his only time in the show ring! 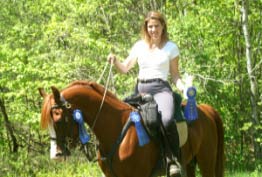 I purchased the bright copper chestnut stallion Just II Cool from BruMarBa Arabians so that I would have a Monogramm son to add color and “pretty” to the herd without losing any athletic ability. “JC” is out of BruMarBa’s premier broodmare, Brumarba Boque by *Barich De Washoe out of a Comar Bay Beau daughter with a tail-line to Pomna Ahmen. Just II Cool has an incredible pedigree filled with racing greats and World & National Champion show horses. Campaigned by Yarrow Farnsworth, “JC” is undefeated in Competitive Trail having won seven Competitive Trail Championships in a rowand regularly completes 50-60 mile endurance rides often with a young teenage girl riding him. Just II Cool has won Championships in Halter across the board (Open, Amateur and Sport Horse-in-Hand). 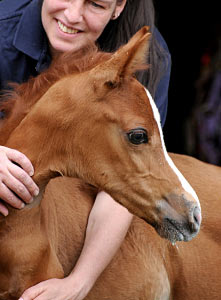 Because of "JC's" excellent disposition the University of New Hampshire, borrows him every year for spring semester to train their vet students to collect semen. He produces flashy, correct, talented, sweet-tempered foals for Trail, Parade, Western Pleasure, Halter, Endurance, CTR, etc. Just II Cool has progeny on both coasts both pure and half bred and I have never seen anything but excellent offspring by him.