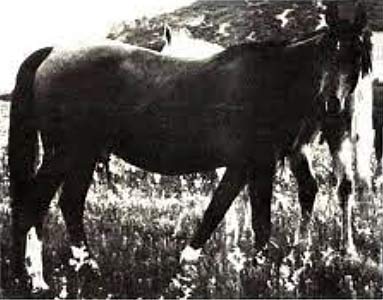 Mammona was called The Treasure of Tersk, (the name means 'Treasure'). Some also refer to her as the Queen of Tersk!.

Dam of Pomeranetz, Metropolia and Nomenklatura

Aside from Ofir, other notable stallions brought to Tersk from Poland included Piolun, the sire of Priboj (out of Rissalma, who had been purchased from Crabbet Arabian Stud); and Taki Pan, the sire of the mare Taktika, who produced the mare Ptashka and the stallions *Pietuszok and Topol (all by Priboj). Topol's son Naftalin sired very good racehorses, including Aspect, who won an amazing 28 of 39 races.[17][18] *Pietuszok was exported to Poland in 1958,[19] where he sired successful racehorses like Wosk, *Orzel, and Wilma (the dam of *Wiking, whose offspring have earned over $8 million in purses).