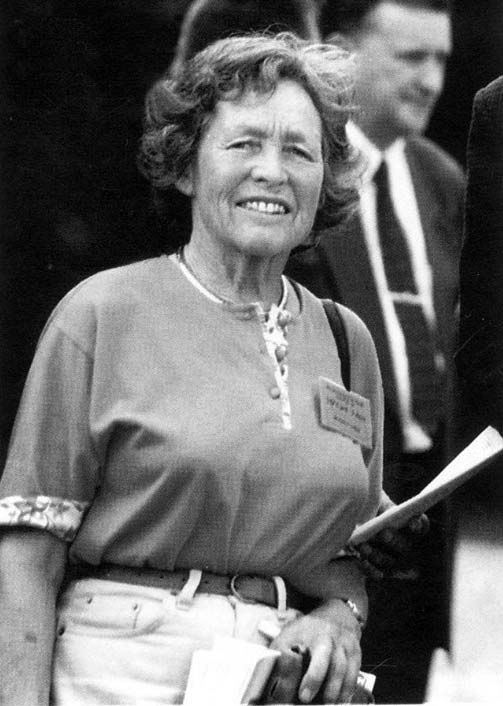 "I am sorry to have to tell you that Patricia died yesterday evening... Her last couple of days she was very bright and in good heart but unfortunately age was against her - she was 87 ... She has been asking after her horses all through her illness. She has remained all her life a supporter of Polish Arabian breeding and true to her own ideals. - Richard"

We at Phase II-Fast Track are saddened to hear of the death of our friend Patricia Lindsay, a wonderful lady and a great breeder of Polish Arabians. In 1998 my dear friend Sheri Lacey and I, along with our two daughters, went to visit Patricia and her sister Sonia and their friend Richard at their farm in England.

We had a wonderful time walking her pastures, enjoying all their beautiful mares, especially as most of them are related to our bloodlines here in the States... thanks to Patricia allowing John Rodgers to purchase and import the Gerwazy son "Karadjordje" to the John Rodgers "Home of Champions" at Lacey Arabian Center in California, US, in the late 1960s. Sheri and I were privileged to be apprentices and "grew up in the industry" with John Rodgers, Murrel V. Lacey, Karadjordje and his progeny.

After World War II it was impossible to export from Poland as it found itself within the Soviet block. Patricia went to Poland in 1958 and was delighted with the horses there bringing home the mares Celina and Karramba. She was so enthralled with the Polish horses that she learned the Polish language importing more Polish horses and also became the agent for sales of Polish Arabians to America.

Gerwazy the sire of Karadjordje was successfully raced in Poland and after Patricia imported him to England he was three-time horse of the year against all breeds and in all disciplines. "Jordje"'s dam Karramba, one of the most beautiful Polish mares of all time, was awarded Reserve National Champion Mare in England at the age of 23 carrying her 17th foal!

John Rodgers was looking for a supreme athelete to breed with his *Serafix daughters and while having tea with Patricia looked out the window and saw Karramba with the young foal Karadjordje by her side. Karadjordje would nurse all the milk from his own dam then make a mad dash and jump over those high English hedge fences and nurse off the other mare in the next pasture, then jump back into the pasture with his own Mum. John was so impressed with his intelligence and athletic ability that he imported him. Karadjordje went on to be Triple National Top Ten in Halter, Park and Formal Combinations, all at the same US National Championship show - an unheard of accomplishment in stamina, versatility and ability. *Karadjordje +++ is a cornerstone of the Phase II program and the grandsire of Remington Steele*++.

The Karadjordje/Serafix cross produced countless National and Top Ten Champions in the United States and to this day is remembered and called the "Golden Cross". Remington Steele*++'s dam Jordjina, herself a Class A Champion is an example of the Golden Cross. Jordjina is out of the *Serafix daughter Chlosina by Karadjordje, one of nine quality Arabians resulting from the nick of *Serafix on Chloeyn, by Raseyn and herself out of the pure Polish mare Chloe, most of whom became champions.

Chlosina is a full sister to:

Remington Steele's dam, the Karadjordje daughter Jordjina out of *Serafix daughter Chlosina founded her own dynasty producing six foals by Gaffizon+++, four of which became champions (the other two have not been shown), including Remington Steele's only full brother Overlook Jordje+++ who has over 200 points in Halter, Pacific Slope Champion Stallion, Regional Champion Stallion, Championships and wins in Halter, English Pleasure and Western Pleasure, as well as the champion mares OverLook Gwynne and Overlook Gaiete. It is easy to see why Remington Steele*++ became the legend for intelligence, versatility and conformation that he is. We write this in tribute to Patricia Lindsay... all of this made possible by her love for the Polish horses and a precocious little foal she imported in utero from Poland named Karadjordje.

Another of Patricia's Gerwazy daughters Lalage is the dam of U.S National Champion Stallion *Aladdin.

"In loving memory of you and your kindness, Patricia... we forever remain indebted to you and grateful for your breeding - what an amazing legacy"
... Patti Demers Bailey